Setting up and using Build Tools

DeployBot Build Tools are a way to prepare your source code for deployment. You can provide us with a script or a single command that needs to be run, and we will execute it on our servers, inside a protected Docker container, with your source code attached to it. It is a great way to compile or minimize your assets, build your executable files, run tests or a linter on your code, and many other things.

How does it work?

In order to get up and running, you don't need much. In your deployment server settings, you will be able to select one of the predefined containers - they are usually a good fit for most purposes. You can find the Build Tools block on your server settings page, in the 'Compile, compress, or minimize your code' section: 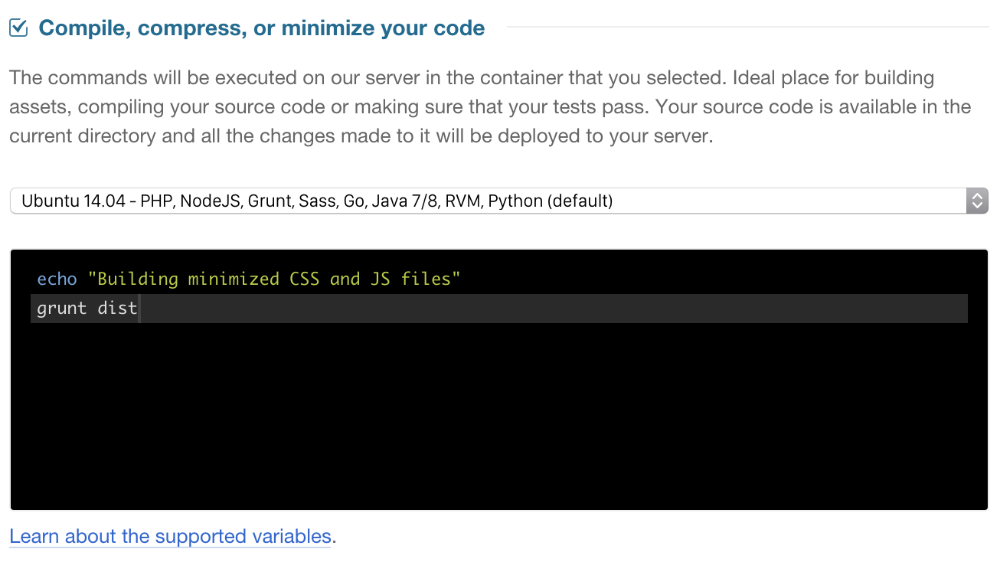 A better option is to use Cached build commands option in advanced settings. Any script placed in this field will be executed only when the following files changed in your repository: Gemfile, Gemfile.lock, package.json, gulpfile.js, Gruntfile.js, project.clj, composer.json. You can also specify what particular file change you want to trigger re-caching of build commands by adding this as the first line of your script: # refresh: myfile.js, test.ini

The following consideration can be made for handling dependencies:

Configuring your own containers

Sometimes you need to perform some elaborate configuration that you don't want to repeat for every server, for convenience reasons – like build time or configuration time. In this case, you can create your own containers, based on our predefined containers or any public containers from Docker registry. To do so, go into Containers tab in your account settings and create a new container:

After the container is created, you should be able to use it for all the servers in your account. This can save you considerable time during configuration and your builds. Also, if you want to some really advanced container configuration, like using a different Linux version or you have some exotic software requirements, you can build the container on your own and deploy it to the Docker registry first, and then create a new container using it as described here.